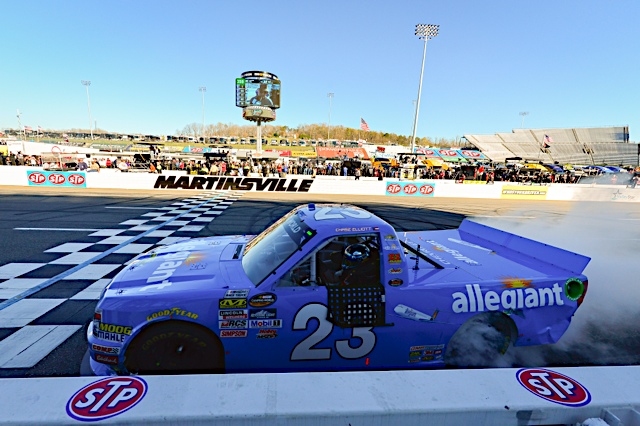 Elliott grabbed the lead from third-place finisher Christopher Bell on Lap 234, when Bell’s Toyota tangled with Austin Cindric’s Ford through Turns 1 and 2. Bell lost the top spot, and Sauter charged past into the second position before NASCAR threw the 10th and final caution of the race.

The decisive move, however, came after the final restart on Lap 239, when Elliott blocked Sauter’s crossover move in Turn 3 and kept the lead.

“It was fun today,” Elliott said. “I had some help there with Christopher’s misfortune. I was trying all I could to get by him. He was doing a really good job of maintaining my bumper, a good job with me hitting him … His bumper was getting progressively more blue (the color of Elliott’s car) as the day went.

“It was a hard-fought battle, for sure.”

And then came the battle with Sauter, who said he would have made the same blocking move on the final restart, had the roles been reversed.

“Chase did what he needed to do with the old block,” Sauter said.

“I saw him coming in the mirror with a big run, and I knew I had to block him,” Elliott said. “Fortunately, it worked out.”

Sauter took the second stage but had to come through the field from 13th following the restart for the third stage after pitting for tires in a contrarian strategy to that of Elliott, who got fresh rubber before the end of Stage 2.

Note: Sauter took over the series lead by four points over Bell, who won the previous NASCAR Camping World Truck Series race at Atlanta … Elliott and Sauter reversed their positions from the fall race at Martinsville, which Sauter won on the way to his first championship.