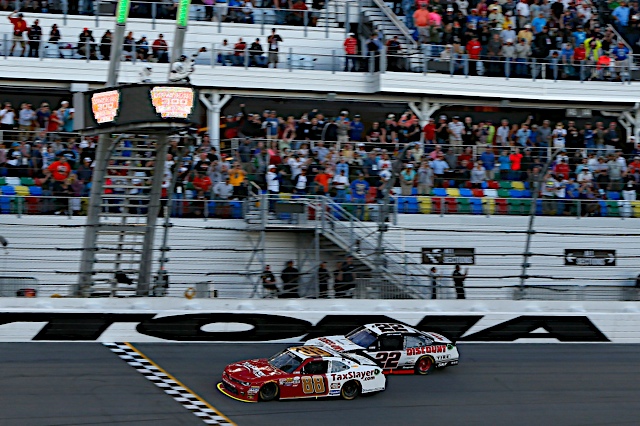 CHASE ELLIOTT HOLDS OFF LOGANO FOR NXS WIN AT DAYTONA

But it was the high-speed chess game seconds before the first and second-place cars crossed the finish line that made all the difference.

Fearing he wouldn’t get help from Kasey Kahne, Elliott’s JR Motorsports teammate, Logano pushed Elliott clear of the pack on the final lap, hoping to make a move to the outside as the cars sped off Turn 4.

But when Logano went high, Elliott moved to his right, and repeated contact between Elliott’s No. 88 Chevrolet and Logano’s No. 22 Team Penske Ford—hard enough to pound a deep dent into Elliott’s right rear quarter panel — broke Logano’s momentum and allowed the No. 88 to cross the stripe .043 seconds ahead of the No. 22.

“He blocked it — I got there a little bit late,” Logano acknowledged. “And then I got hooked on his right rear, and that’s what killed my momentum… That contact just stopped my car.”

So the pole winner for Sunday’s Daytona 500 (on FOX at 1 p.m. ET) beat the winner of the 2015 Daytona 500 by a small fraction of a second, and Logano was runner-up for the third time during Speedweeks, having run second to Denny Hamlin in last Saturday’s Sprint Unlimited and second to JR Motorsports co-owner Dale Earnhardt Jr. in Thursday’s first Can-Am Duel.

“That was a heck of a battle, man,” said Elliott, who survived early contact during a six-car incident on Lap 13 and rallied to win his first XFINITY race at Daytona and the fifth of his career. “I had such a great car, and we just found ourselves in the right place at the right time.

“Luckily we just barely had enough to get in front of Joey there.”

Elliott duly impressed his car owner, an acknowledged superstar when it comes to restrictor-plate racing.

“I’m proud of Chase. It’s such a cool thing to be a part of his career. He’s going to do some amazing stuff in his career, and it’s awesome to be a little part of it.”

After Ray Black Jr. stalled on the backstretch to cause the fourth caution of the race on Lap 102 of 120, ending a 76-lap green-flag run, Logano led the field to green on Lap 108 with Elliott beside him. While Sadler pushed Elliott to the lead, Logano got hung out of line and drifted back.

“It’s three races and three seconds, and I guess it is nothing to hold your head down about, but, gosh, when you see the lead that many times and are that close to winning and don’t pull it off, it’s frustrating,” Logano said.