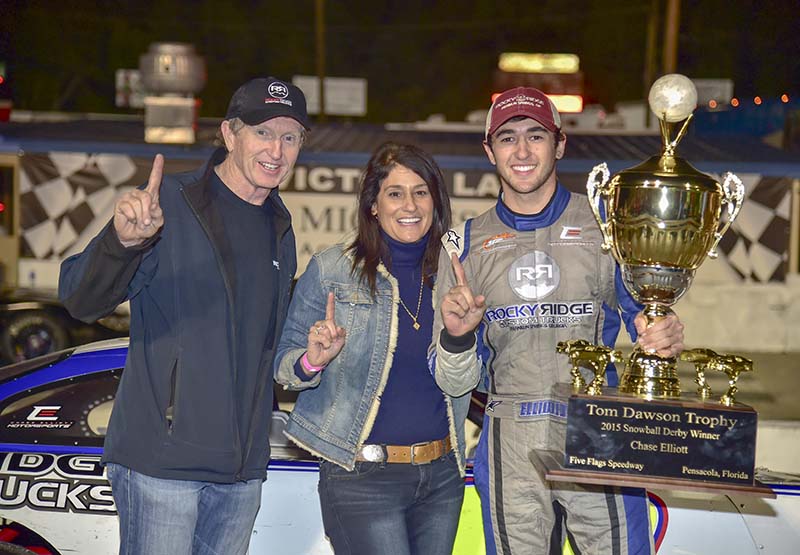 For the second time in his career, 20-year-old Dawsonville, George racer, Chase Elliott took the win in the Snowball Derby. Elliott was not the driver who crossed the finish line first however as Norman, Oklahoma youngster, Christopher Bell dominated the final third of the 300 lap race en route to what was thought as the win. Unfortunately for Bell, his Phoenix Construction Toyota failed post-race technical inspection when officials found his car to be over the 58% left side weight limit by .3%.

Ty Majeski of Seymour, Wisconsin took the lead at the start of the 48th running of the Snowball Derby before giving way to Elliott on lap three. Elliott held the lead for three laps, the only three laps he led all race before giving way to Majeski. The first 60 plus laps were clean and green as Majeski held serve over the field.

Pit stops under a lap 64 caution shuffled the field and gave the lead to Preston Peltier who held the lead for 23 circuits before Zane Smith took over for 39 laps. Lakeport, California driver, Derek Thorn got to the lead on lap 129 and led until lap 172 when pit stops again cycled the field. Smith regained the lead for a lap then was overtaken by Bubba Pollard.

John Hunter Nemechek maneuvered his way to the lead on lap 190 after starting at the tail-end of the field in 39th position. Nemechek held the lead until lap 201 when another driver who had to start near the rear of the field, Christopher Bell took the top spot.

The race looked to be in Bell’s favor but caution flag in the final 30 laps bunched the field. Surprisingly Bell chose to restart on the outside line which allowed Nemechek to restart on the inside. Nemechek got the advantage on Bell and got to the lead on lap 276. Nemechek’s chances at victory would literally go up in smoke. A fire began to develop in the right front wheel of his car just after he took the lead.

On lap 283, Bell retook the lead for the final time as Nemechek’s car began to smoke more heavily. By lap 294, the fire forced Nemechek into the pits where fire crews took to the blaze. At the finish it was Bell across the line first by a rather comfortable margin in what proved to be a very clean Snowball Derby. Elliott placed second followed by Smith, Majeski, Dalton Sargent and Pollard. With Bell disqualified in post-race tech, Elliott inherited the win as his car did pass inspection. Bell was credited with 39th position.

It wasn’t the first time during the weekend that teams had issues in technical inspection. Both Bell and Nemechek’s cars failed post-qualifying inspection. Nemechek had the benefit of a provisional from being the defending race champion while Bell had start at the rear of the B-main event which he was able to win. Corey LaJoie also faced the wrath of race officials when a crew member illegally tried to repair his car after he his the wall in qualifying. LaJoie had to start at the rear of the B-main as well and he too was able to transfer into the Derby.

It also is not the first time a driver has been disqualified from winning the Snowball Derby. Chase Elliott was disqualified from the 2013 running of the event when his car was found to have an illegal tungsten weight. In 2008, Brian Ickler’s victory was taken away for having a fan blower on his brakes. In 2006 the first and second place finishers, Johnny Brazier and Bobby Gill were disqualified, Brazier for being over the left side weight limit and Gill for his tire-width being over the width regulations by a quarter of an inch.

Elliott’s win in the 48th running of the Snowball Derby was his second in the prestigious super late model event at Pensacola, Florida’s Five Flags Speedway. Elliott took the 2011 victory at the high-speed half-mile. Nemechek took the victory in Saturday night’s pro late model preliminary race, the Snowflake 100. Nemechek dominated the race, leading 94 laps in the same car that he won the previous year’s Snowball Derby in. Elliott placed second followed by Bret Holmes, Kenzie Ruston and Cole Anderson.

By Matthew Sullivan, Beyond the Flag