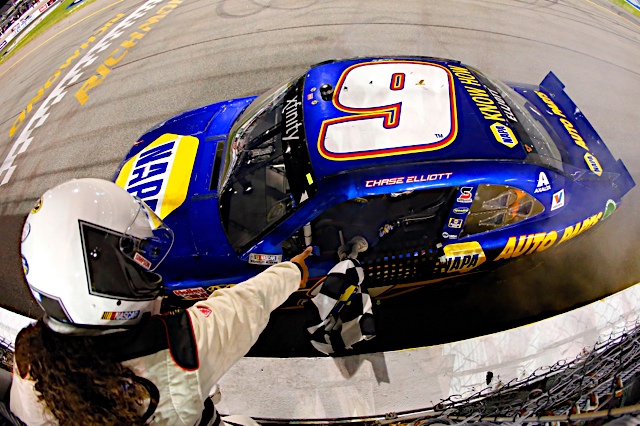 ELLIOTT HOLDS OFF BUSCH TO WIN AT RICHMOND

RICHMOND, Va. – Reigning NASCAR XFINITY Series champion Chase Elliott was first off pit road under caution on Lap 218 of 250 and held the top spot the rest of the way in breaking a 39-race winless streak on Friday night at Richmond International Raceway.

Elliott’s victory in the Virginia529 College Savings 250 trimmed his deficit to 21 points behind series leader Chris Buescher, who finished 10th. Elliott’s first victory of the season was also the first in 22 races for an XFINITY Series regular at Richmond.

“We always want to come and give our best shot and try to win,” Elliott said. “(Crew chief) Ernie (Cope) brought a great car, and the pit stops were phenomenal.

“I’m just super excited to be back in Victory Lane.”

Yes, Elliott won the event in the No. 9 JR Motorsports Chevrolet, leading a race-high 83 laps on the way to his first win at Richmond and the fourth of his career.

Perhaps, the loudest noise, however, came from late model stock car star and Dale Earnhardt Jr. protégé Josh Berry, who trumpeted his presence in his maiden XFINITY race at Richmond with a seventh-place finish.

During an 81-lap green-flag run from Lap 54 through Lap 134, Berry drove from seventh to second. In the latter half of the run, Berry trimmed a five-second deficit to Scott, the leader, to 2.6 seconds before Jeremy Clements’ wreck in Turn 2 slowed the action for the fourth cation of the race.

Berry repeatedly lost positions on pit road, the last time because egress from his stall was blocked by the No. 6 Ford of Darrell Wallace Jr. He lost five positions under that sixth caution and restarted ninth on Lap 226 before recovering to finish seventh.

“I need to do better on restarts, I need to do better on pit road, and I think we would have had a real shot at winning that race,” said Berry, who is auditioning for potential partners in hopes of running a full XFINITY Series schedule for JR Motorsports next year. “I’m just so proud of this team. They brought a great car tonight.

“I sure hope I helped (my cause) tonight. I’m just a short-track racer at heart, so tonight played into my favor.”

“I wasn’t good enough all race long,” said Busch, who led 78 laps, including the first 49, before Scott took a long stint at the front. “I don’t know where the long-run speed went.”