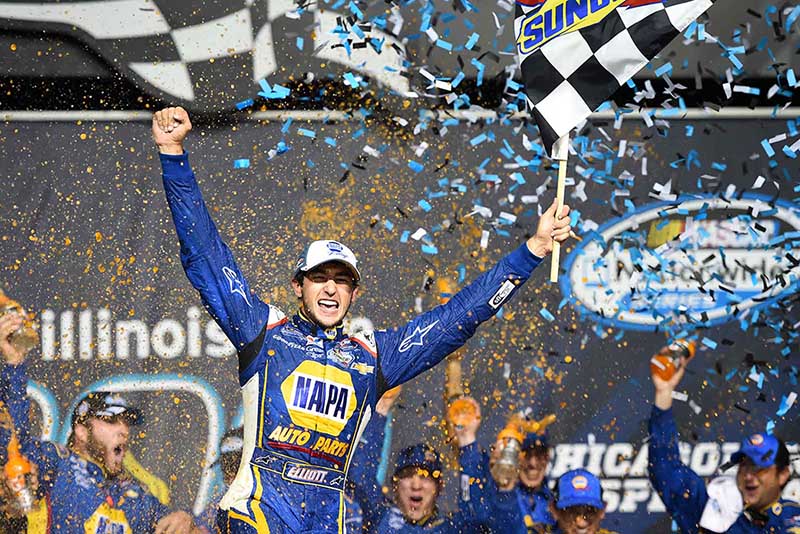 Accomplishing feats uncharacteristic for a rookie, Chase Elliott won once again, leading 85 of 200 laps en route to his third win of the season in Saturday’s NASCAR Nationwide Series EnjoyIllinois.com 300 at Chicagoland Speedway.

Elliott took the lead for the fourth and final time on Lap 177 and held on for the final 23 laps, winning by 1.7 seconds. The Nationwide Series Sunoco Rookie of the Year frontrunner ties Kyle Busch for most wins in the series thus far this season, each with three visits to Victory Lane in the first 19 races.

“This is an unbelievable night,” Elliott said. “We were fortunate enough to be in contention on that last pit stop; the guys busted their butts for me and that was the deciding factor.

“We all, as a team, we completed our task tonight. And that was the difference.”

“We got our car turning there at the end,” Bayne said. “That’s probably the strongest weekend we’ve had in a while. Had it stayed green for another 15, we might have had it, but that’s 15 laps we’ll never know about.

As for Dillon, “I’ve got a feeling that we can keep doing this as the year goes on,” he said. “The car was coming to me there at the end.”

In addition to the race’s winner, Kahne was the second JR Motorsports driver in the top five. It almost didn’t happen for Kahne, who brushed the wall late and sustained just enough damage to keep him from making a last-ditch run towards the front.

Seventh through 10th were Erik Jones (in his NNS debut), Buescher, Ryan Blaney and Sadler.

Smith, who was the points leader coming into the race, struggled with a loose car and finished with a disappointing 16th showing.

Elliott’s win also vaulted him from third to the top of the Nationwide points standings. He now leads Smith by seven points and Sadler by eight points.

A series of green-flag pit stops around Lap 161 shuffled the field, with teams hoping they could make it to the finish without it turning into a fuel-mileage race.

Bayne took the lead at Lap 161 when the leaders made stops for service and held on until he had to come in on Lap 176 for four tires and fuel. Elliott inherited the lead, and kept it for the remainder of the race.

Polesitter Scott led 20 laps early on before Blaney, Elliott and Larson took their turns ahead of the field.

Sam Hornish Jr., who started at the back of the field due to unapproved adjustments, quickly worked his way up to the middle of the pack only to have an uncharacteristic engine failure in his Joe Gibbs Racing Toyota end his night just eight laps into the event, finishing 36th in the 40-car field.

“It felt like we were going to have a really good day and felt like this was going to be a race where we had opportunity to lead laps and potentially win,” Hornish told ESPN.