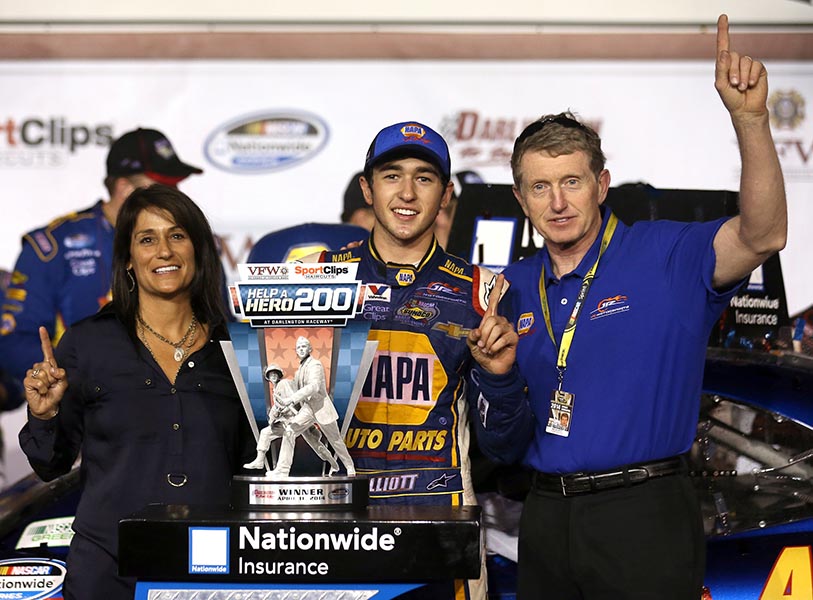 DARLINGTON, S.C. — It took a mere seven days, but Chase Elliott has already made a great leap forward. Last week, he did the unlikely. Friday night, he did the impossible.

The NASCAR phenom continued to break new ground, this time at perhaps the most challenging track the series has to offer. Mired in sixth place on a final restart with two laps remaining, the 18-year-old Elliott made a series of aggressive moves to get back to the lead, and then made jaws drop across South Carolina cotton country by becoming the youngest driver ever to win a NASCAR Nationwide Series race at Darlington Raceway.

And how he did it will have them talking in barbecue shacks from Manning to Myrtle Beach. The son of Bill Elliott — who earned his Million Dollar Bill nickname here in 1985 — Chase found the sparest of openings off the final restart and pounced, wedging his way past one NASCAR Sprint Cup Series driver after another and within sight of leader Elliott Sadler, who had taken two tires on the final stop. Elliott didn’t bump Sadler, but he didn’t need to — the No. 11 car was loose and wiggling, allowing the JR Motorsports rookie to squeeze by and seize his second consecutive victory.

But the level of amazement that accompanied Elliott’s victory Friday night far exceeded that of even his breakthrough a week earlier at Texas Motor Speedway. With its odd layout and up-against-the-wall racing groove, Darlington has for ages been the domain of more established drivers, even in NASCAR’s No. 2 series. Entering Friday, the last full-time Nationwide driver to win at Darlington was Brian Vickers back in 2003, when the track had two NASCAR events and one was on Labor Day weekend. Every Nationwide winner since had been a moonlighting Sprint Cup driver, just as it had been years earlier when the likes of Harry Gant, Darrell Waltrip and Dale Earnhardt would step down and clean up.

So all the odds favored one of the Sprint Cup drivers lined up between Sadler and Elliott on that final restart — Kyle Larson, Kyle Busch, Matt Kenseth or Kevin Harvick — celebrating in Victory Lane. Elliott defied it all, passing one after another in the two laps remaining, and in the process becoming just the fourth driver to win his national series debut at Darlington — joining inaugural Southern 500 champion Johnny Mantz in 1950, Hall of Famer Herb Thomas in 1951 and Dick Rathmann in 1952.

“Nothing really rattles him,” said his car owner, Dale Earnhardt Jr. “When it came down to the end there and it was time to really get after it, he had his composure and did what he needed to do and made it work. That’s going to be tough to contend with for many years.”

Particularly if he continues to race as assertively as he did Friday night. There wasn’t much of a gap between Kenseth and Harvick on the backstretch after the final restart, and it wasn’t open for very long. But Elliott pounced on it, nudging his way past the two Daytona 500 winners and somehow shooting up to second as the cars approached the white flag.

“There was a little bit of an opening,” Elliott said. “I think Matt was on the bottom, and we had a pretty good run and I was pretty committed. If he was going to slide up in front, he had about .0001 seconds to do it, or the hole wasn’t going to be there. Again, I was pretty well committed at that point to try to roll the top. That was the only option I had to win the race.”

We’ve seen aggression from Elliott before — everyone remembers how he won his NASCAR Camping World Truck Series event — but Friday night he competed almost fearlessly, whether it was going door-to-door with Larson earlier in the event or slinging his way past established Sprint Cup stars at the end. Speed plus nerve are a potent combination, as Elliott showed under the lights at NASCAR’s older major speedway.

“It’s surprising to see that he makes those moves and his instincts are correct,” Earnhardt said. “There’s some guys that get indecisive because they’ve never been there, and they don’t know whether the car can do it, and they don’t know whether they need to do it. You can see guys get indecisive in those situations, and he just seems to be able to pull the trigger and drive it in there. He’d got a lot of confidence in his car to be able to do those things.”

To Elliott, it was just what he had to do to win the race.

“It was one of those situations where you come down to the last two laps of the race, and you have a choice to make whether you want to win the race or give somebody a break,” he said. “I don’t think anybody’s going to give somebody a break, as far as letting somebody in line at the end of a race like that. So I feel like I made the same decision anybody else would have in that situation.”

The last man standing between Elliott and Victory Lane was Sadler, who on two tires was barely holding on.

“I was so loose anyway,” Sadler said. “And when I was coming down the hill coming down Turn 2, I was trying to stay in it, because I knew he was coming on four tires. I just got really loose and about wrecked. I actually thought I was going to spin to the inside. I actually closed my eyes for a minute. Chase did a good job of staying in the gas and getting on the outside of me. Once he got on the outside of me going into (Turn) 3, I knew it was going to be tough to hold him off.”

It was, and a celebration like nothing old Darlington Raceway has ever seen — and this track, opened in 1950, has seen just about everything — began to unfold. Earnhardt knew Elliott was comfortable on slick tracks like Darlington from the younger driver’s super late model days on similar venues. And he knew Elliott had the demeanor, having seen the unflappable manner in which his driver has handled all his sudden success.

“His personality, I like to call him the New Elvis,” Earnhardt said. “He’s the full package, man. He just has it all. The sky’s the limit with that kid.”

And just wait until that kid actually grows up. “He ain’t even focusing on racing 100 percent. He’s still in school,” Earnhardt added. “Wait until he graduates, he’s going to be real trouble for those boys.”