Mike Rich Devoted to the Elliotts and to Winning 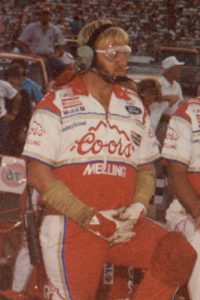 Many talented crew members contributed to the success of Elliott Racing and Melling Racing during their successful tenure in NASCAR throughout the 1980s and 1990s. Each of them were honored to work alongside NASCAR legends George, Ernie, Dan and Bill Elliott and contributed to their storied dynasty.

One of those was Mike Rich, a rear tire changer that lost his life in a pit road accident during the season finale at Atlanta International Raceway on Nov. 18, 1990.

The crash occurred as Ricky Rudd slowed to enter his pit stall during a caution on lap 300 of the 328-lap race. The brakes on Rudd’s Chevrolet locked, sending him spinning into the right-rear of Elliott’s car where Rich was changing the tire.

Dan, as well as teammate Tommy Cole, were hit by Rudd’s Chevrolet. Cole was in and out of consciousness but remembered ESPN broadcaster Dr. Jerry Punch asking him if he was alright.

“All cameras were on us because we were leading the race,” Cole said. “I had just pushed down on the jack handle and it happened. There’s a shot of my headphones and hat about two feet above my head. For some reason or another, I can remember hearing Bill say, ‘I think Tommy is hurt. Check on him.’ But how did I hear that if my headphones got knocked off my head? I haven’t figured that out yet.

“I credit it all to the Good Lord because I didn’t have one scratch or one broken bone. There was no evidence whatsoever that I was hit. I don’t understand it all but I’m thankful for the way things turned out on my side of it.”

Rich was not as fortunate as Cole, having suffered fatal injuries after being pinned between Elliott’s Ford and Rudd’s Chevrolet. At the time of the accident, Rich was so focused on changing the right-rear tire that he didn’t see Rudd spinning out of control behind him.

Rich’s tenure with Melling Racing began in the late-1980s when the team was looking to fill crew member positions on the team. The Blairsville, Ga. resident operated his own grading business when he wasn’t traveling the country during race weekends.

His work outdoors with a variety of landscaping jobs proved beneficial for wrestling heavy race tires and wheels on and off of rear spindles. He proved to be one of the best in the business each time Bill wheeled their No. 9 Fords in for service.

Charles Palmer, a general mechanic for Melling Racing, remembered his close friend as a loyal employee that gave his all to the job at hand during every stop.

“Mike was a super nice guy,” Palmer said. “He took one of the old race cars to his home and practiced constantly changing tires until he was good enough to make the pit crew. He worked hard to make it. Being on the crew meant so much to him. When started going to the races with the team he just loved doing it. He absolutely enjoyed life.”

Mike Brandt, gas man for Melling Racing in the late 1980s, remembered Rich as dedication to doing the job right.

“He was really dedicated to what he was doing,” Brandt said. “He had his own business when he was home but he was 110 percent into what he was doing. He may have been frustrated from a bad pit stop or something like that but I never saw him mad. He was always the same. He was just excited to be there.”

“Mike was just a good all-around guy and easy to get along with,” Swafford said. “He would do anything you asked him to do and was a pleasant guy to work around.”

Within a display honoring the Elliott family at the Georgia Racing Hall of Fame hangs one of Rich’s Melling Racing crew shirts and a photo taken during the 1990 season. Race fans as well as many within racing circles feel he should be inducted into the hall among Georgia’s greatest racers.

“I think Mike absolutely deserves to be in there,” Bill said. “He gave it his all and at the end of the day, he gave his life for what he was doing. How do you ask anyone to do more than that?

“There’s no question that everybody had a ton of respect for Mike. If you said charge, he would be the head of the pack. He would be the one leading you on. He did a great job of bringing people together and always had a great attitude about it.”

As a direct result of the accident at Atlanta, pit road speed limits were implemented in 1991. Over time, mandatory helmets and fire proof uniforms followed and as of 2018, fewer crew members are allowed to go over the wall during pit stops.

“Safety measures have come into play because of what happened that day,” Cole said. ““I feel like it all changed worldwide.”

Mike Helton, NASCAR’s vice chairman, was general manager of Atlanta International Raceway in the mid-1980s. During that time, the Bristol, Tenn. native became good friends with the Elliott family.

“I was running the Atlanta track while the Elliott clan was developing and got to know Bill and Ernie and Dan Elliott,” Helton said. “A lot of their crew guys were really unique individuals of their own and Mike was certainly one of those. I watched him develop and become more competitive. All of their personalities were down to earth.

“Losing Mike was tough. It was tough on the whole Elliott family, tough on the team and tough on our sport. I did get the opportunity to know Mike for a few years. You just had to like all of those guys. They kind of migrated around the Elliotts as they were building their program. Mike was one of those that helped to build that.”

As a result of Rich’s death, NASCAR officials and many Cup series team owners, such as Junior Johnson and Bud Moore, came up with a rules package for 1991 that would keep all crew members safe on pit road. NASCAR’s first plan was to use odd and even decals on race car windshields to determine when drivers would make pit stops. The concept proved confusing and difficult for fans to understand.

A second idea to regulate pit road speeds actually came to fruition through previous use in special race formats such as the All-Star events at Charlotte Motor Speedway. Pit road speeds were implemented in the Winston Cup Series beginning at North Wilkesboro Speedway in April of 1991.

Helton was working with Talladega Superspeedway at that time but was a big part of those conversations.

“We knew we were going to change the dynamics of pit road,” Helton said. “The overwhelming desire to make it safer won out at the end of the day.

“I think it was Bud Moore that mentioned the South Carolina Highway Patrol was using helicopters to clock between two markers on interstates. That’s where pit road speeds started.  That’s when we put the white lines on pit road every 50 feet or so and we literally sat in the control tower and timed cars with stop watches between those lines to determined pit road speed. Now we do it with loops electronically, which is much more efficient than doing it manually. That moment changed the culture around pit road.”

Rich will always be remembered as a dedicated racer that worked hard to perform his duties to the very best of his ability.