No driver in any form of motorsports can enjoy success on the track without a dedicated pit crew working behind the scenes. That was especially true with NASCAR legend Bill Elliott and the close-knit group of team members that kept his No. 9 Fords in the win column for 15 seasons.

From 1976 through 1991, Elliott Racing and Melling Racing established themselves as winners and champions through 34 victories as well as 116 top-five and 195 top-10 finishes. Those crewmen also helped build and prepare the cars that Bill drove to win the lucrative Winston Million bonus in 1985 at Darlington (S.C.) Raceway and the Winston Cup championship in 1988.

Local friends and neighbors from Dawsonville, Ga. and surrounding towns offered their time and talents and built one of the greatest dynasties in NASCAR history. More importantly, each one was thought of as a member of the Elliott family, which still holds true to this day.

Mike Brandt, fabricator and gas man with the famed No. 9 team over two stints (1983-91, 1996), remembered many rewarding years with the Harry Melling-owned operation.

“I was in a position where I was a fabricator and I had a good bit of freedom to do basically whatever they wanted or what I felt like might improve performance,” Brandt recalled. “We had our responsibility that we took care of. We all had our jobs to do and knew how to do them.” 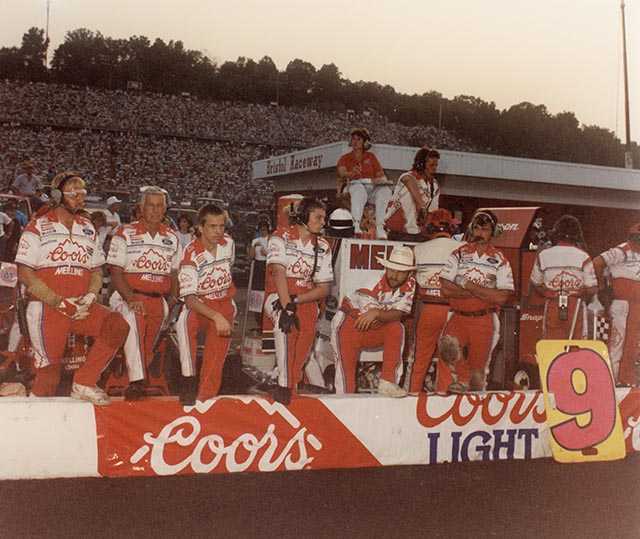 Brandt remembers not only the comradery felt among team members, but also the seriousness of the job at hand.

“When we went to the race track, there was so little communication, other than to say we were going to change a motor or build a new rear-end or transmission or whatever,” Brandt said. “Everybody did their job and knew how to assist and knew how to stay out of the way. I think that was a real important factor.”

What made them great was how they believed in each other and their collective mechanical talents. So much so that Melling Racing won the UNOCAL Pit Crew Championship competition at North Carolina Motor Speedway in 1982 and again in 1990. The winning crew of 1990 consisted of Mike Brandt, Clinton Chumbley, Tommy Cole, Dan Elliott, Ernie Elliott, Mike Rich, Doug Shook, Mike Thomas and J.W. Waldrop.

“That was a real neat experience,” Brandt said. “We had been real close the year before. But Melling Racing had also won that back in the 1980s with the older team. We won the Unocal championship the year we lost Mike Rich, so that kind of created a different feel about it I guess.”

Rich lost his life in a pit road accident at Atlanta Motor Speedway on Nov. 18, 1990. Russ Bales became a tire changer with Melling Racing in January of 1991 after Rich’s death.

“I pretty much knew all of those guys from being the Snap-On tool guy,” Bales said. “I would go in and out of their shop and they would be there practicing. I had told Ernie, Bill and Dan I’d be interested in helping. Ernie had built some engines for a guy named Bob Penrod, running in IMSA (International Motorsports Association). That’s when I started working on race cars for a living.

“It was neat to be a part of that deal (working the Melling Racing). It was kind of sad because I took Mike Rich’s place changing rear tires. Dan was doing the front tires and Doug Shook did the left side tires. I practiced with them and they pretty well welcomed me in there. We all helped each other. We did it together.”

Like all other members of the small team before specialists and engineers became commonplace within NASCAR’s Cup series, all members of the Melling organization were versed in a variety of jobs.

“Ernie and I always got along probably as good as anybody that was on the chassis side of the shop,” Bales said. “The first part of my career, I was with Bill and the second part was with Ernie. They were very good to work for. Ernie is very direct and Bill maybe not so much. Dan did teach me a lot about building rear ends. I might have taught him a few things about building Borg-Warner transmissions.”

For Gerald “Bugs” Swafford, the team truck driver and windshield washer during pit stops, winning the 1988 Cup championship will be a milestone that will always be cherished.

“We were working there as a team, that’s what it was,” Swafford said. “A lot of people will get to talking and don’t realize I was on a championship-winning pit crew. If I have my ring on, I’ll pull it off and tell them it’s my Super Bowl ring. That sort of surprises them when I say that.”

Swafford continues to feel the Elliotts are family. That feeling goes back to his early childhood when he knew George as “Mr. Elliott” in the school hallways. 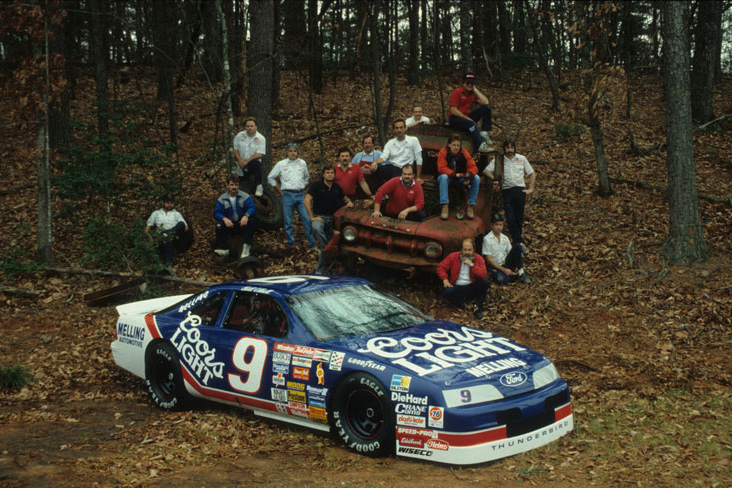 “Their Dad, George, was the principle where I went to elementary school,” Swafford said. “We always knew them. My Dad and their Dad were real close friends. When I got married in 1967, everything that we used to build our house came from the Elliott’s building supply store. So we’ve known each other a long time.

“They were so good to their employees. If you needed something and they had it, you got it. The Elliotts are just good people.”

The stories of success the that Elliotts and their beloved crew enjoyed in the 1980s and 1990s will live on in NASCAR history forever.