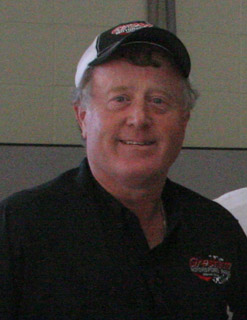 Dan Elliott was the second of three sons of Georgia Elliott and he served as a NASCAR pit crew member and transmission builder from 1976-1991 on the #9 car driven by his younger brother Bill.

Below is a column that Dan penned for the Gainesville (Ga.) Times in 2013.

Elliott: Looking back fondly on racing days from the past

It is a new year, and while most everyone else’s thoughts are on the new year and the resolutions they have made, my thoughts are mostly on Daytona and the start of the race season.

It has always been such an important part of my life going back to a very early age when my dad would prepare cars to make the trip to Daytona to race in the Permatex race that would be held just before the Daytona Speedweeks.

This year, my mind takes me back 25 years to the beginning of the 1988 NASCAR race season. This 1988 season proved to be the beginning of the end of a remarkable journey for a small family and especially three brothers — a season that earned us a championship that comprised very few wins, and a journey unparalleled by many more experienced, better-funded and well-organized race teams.

We would have already been testing before the new year, my brothers, myself and the few employees of Melling Racing based out of Dawsonville, a small north Georgia town that was just on the cusp of busting loose at the seams.

We always went to Daytona to test in January in preparation for the Super Bowl of all NASCAR races, the Daytona 500.

The engine department, of which I was a part since the early 1980s, had worked extremely hard over the winter months primarily because of an engine change that NASCAR made because of us dominating the superspeedways since the Daytona 500 in 1985. This was the engine change that would alter superspeedway racing and would end a two-year domination of the Elliott family on these tracks forever more. With that end, there would be records left that have yet to be broken in the 25 years since, and I don’t believe they will ever be broken.

We knew when we left to go to Daytona in February of 1988 that we would not be able to achieve the speeds nor even be close enough to have an opportunity to win; we knew that in an undeniable way that NASCAR had spoken loud and clear that the domination we once held proudly would be taken from us with the stroke of a pen. There was no cheating, no secret weapon or even one single thing that made us dominate and win races; it was pure hard work and determination of a solid, unified effort that had started its formation in the late 1970s.

We found out in the late 80s how fragile and delicate that balance truly was and how easily it could be broken.

Our body shop would also encounter its own share of disappointments in the year to come as we would find out just how much the other teams had worked and caught up to the aerodynamic advances we had found through the ’85 to ’87 racing seasons. We would also find out how burned out we had become and that burnout would ultimately lead to fewer wins, the absence of the ability to work together as a unit, and an inability to continue the pace we had set in the years leading up to the 1988 season.

An accident on pit road in Riverside, Calif., during the next-to-last race in 1987 forced us to recruit different personnel that would ultimately bring together one of the best pit crews that was ever assembled out of the shops in Dawsonville. I was the luckiest of the crew that was hurt at the Riverside and my shoulder will always be a reminder of that near-fatal event. I thought that the accident that happened at Riverside could only happen to our team once, but tragedy struck our team for the second time at the end of the 1990 season at Atlanta, and that would change pit road for all NASCAR teams forever more, and a back injury is a reminder of that fatal event to this day.

NASCAR put a speed limit on pit road beginning in the 1991 season that would affect all teams, and after the accident in 1990, for myself, pit road would never be the same. I worked only the first four races of the 1991 season and I hung up my air wrench, thus ending my pit road career that had spanned 15 years.

When the dust finally settled on the finale of Speedweeks at Daytona in 1988, our very tired and whipped team left Daytona with a 31st starting position and a disappointing 12th-place finish. NASCAR had hit their mark as far as the speeds and domination once achieved by many great teams, especially a team from Dawsonville, would never happen again, but a valuable lesson was learned that February.

My English teach in high school told me 20 years prior that the pen was mightier than the sword, and on the way home from the 1988 Daytona 500 there was no other thought on my mind. The magic that once was on the superspeedways was gone and would be no more because of the stroke of a pen.