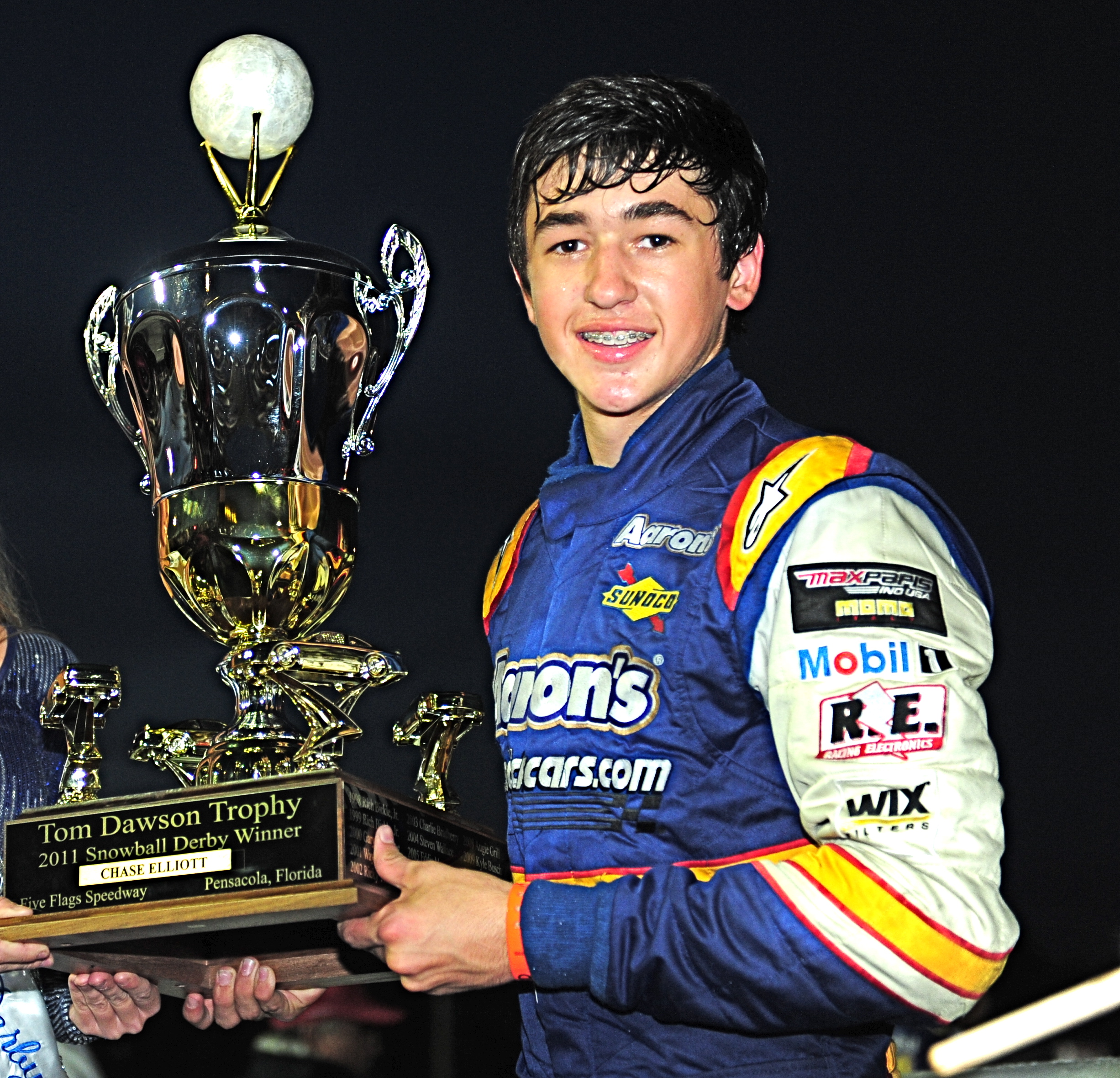 No matter how far he goes in his racing career, a big part of Chase Elliott’s resume will always be that he’s a Snowball Derby winner.

The Snowball Derby is to short track racers what the Masters is to golfers or what the Superbowl is to football players. The Snowball’s list of winners reads like a Who’s Who of auto racing. Former winners include drivers who also have achieved great success in NASCAR, drivers like Pete Hamilton, Donnie Allison, Darrell Waltrip, Jody Ridley, Rick Crawford and Kyle Busch.

The Snowball Derby, held at Five Flags Speedway in Pensacola, Fla., also has attracted its share of famous drivers who were unable to win the coveted trophy. That list includes some of NASCAR’s greatest drivers, among them Dale Earnhardt, Mark Martin, David Pearson and Elliott’s own father, Bill Elliott, who ran the Snowball twice, in 1981 and 1982, but failed to finish either time.

Elliott not only won the Derby, he became the youngest winner in the 44-year-history of the race as he won after turning 16 the Monday before. And he did it in dramatic fashion, outrunning D.J. VanderLey in a five-lap, door-to-door duel to seal the victory.

“It’s what I’ve been looking forward to all year”, Elliott said as he held a tight grip on the coveted trophy from Victory Lane. “I don’t think I’m ever going to let it go.

“I thank Aaron’s and Mom and Dad and the grace of God, and I have to thank my team. They made this happen. They stayed calm fixed the car, and we never gave up.

Elliott and the crew of his No. 9 Aaron’s Dream Machine were among 54 of America’s best short trackers vying for one of the 35 starting spots.

Elliott and his team qualified a respectable ninth for the Snowball Derby, while also competing in the preliminary Snowflake 100, where he was the defending winner. Elliott started 27 in the Snowflake and had worked his way to 16 before being collected in a crash. His Aaron’s team replaced the radiator, and he stormed back to finish fifth and more importantly show that he and his team would do whatever it took to overcome a potential setback.

On Sunday, Elliott was on the move from the start of the 300-lap run. He passed Landon Cassill, Hunter Robbins, Augie Grill, Jeremy Pate and Grant Enfinger to take over the fourth position before caution was displayed on Lap 98, when the Aaron’s team pitted for tires and fuel.

Elliott returned to the track in sixth position. The green flag waved again on Lap 114, and Elliott passed Cassill and Enfinger to take the fifth position before another caution flew for a crash in Turn Four. When the green flag flew at Lap 141, the leaders began spinning off Turn Four and Augie Grill, with nowhere to go, rammed Elliott from behind.

As they did the night before, the Aaron’s crew rose to the occasion and made the necessary repairs under the leadership of crew chief and former Derby winner Ricky Turner.

“It broke the back bumper brace bar, and we had to bearbond it back together because there was no time to weld it,” Turner said. “We came back into the pits three times during the caution, staying ahead of the pace car to maintain our lead lap position.

“The guys did a good job getting everything fixed back, and it all stayed intact to the end of the race.”

As Elliott tightened his belts to take the green flag after his team finished taping the car back together. Always the optimist, he radioed to the crew:“ Good job, guys. I’m not giving up.”

He lined up as the last car on the lead lap in his Impala “Jerry-Lee” in its debut run and began making his way back through the field.

One by one he picked them off smooth and steady, and by Lap 218 he had moved into second place. When the caution was displayed on Lap 220, Turner called Elliott to the pits for tires and fuel for what would be their last stop of the day.

Elliott came out of the pits as the leader for the first time in the race.  Many more cautions played into strategies for teams as the laps wound down, but it was the call from Turner atop the pit box when caution was displayed on Lap 272 that put Elliott in position to win.

Turner left Elliott on the track, telling him: “Stay out. Game on,” even as Enfinger, in second place, stopped for four fresh tires.

“They have to pit to have any chance of catching you,” Turner said. “We have to run our race.”

Over the final laps, Elliott and D.J. VanderLey pulled away to settle the race among themselves, just as Carl Edwards and Tony Stewart had done at Homestead-Miami Speedway  to decide the Sprint Cup championship.

Elliott’s final hurdle arose when a late-race wreck brought out the red flag and set up a five-lap dash for the win.

Elliott admitted that he didn’t have the best restart of his life, but he hung in there with VanderLey and the two jockeyed for the lead before Elliott pulled ahead on the final lap to win by 0.229 seconds.

Elliott said he wasn’t particularly nervous over the final five laps. He was just trying to be smooth and race responsibly.

“I was just trying to hit my marks,” he said. “I knew I had a good car, and I was trying to be smart and race [VanderLey] clean and not wreck him.”

It was a birthday wish come true in a big way, as Elliott told his mother Cindy in Victory Lane.

“I wished for this, Mom,” he said. “I wished to win the Snowball Derby. This is my wish come true.”