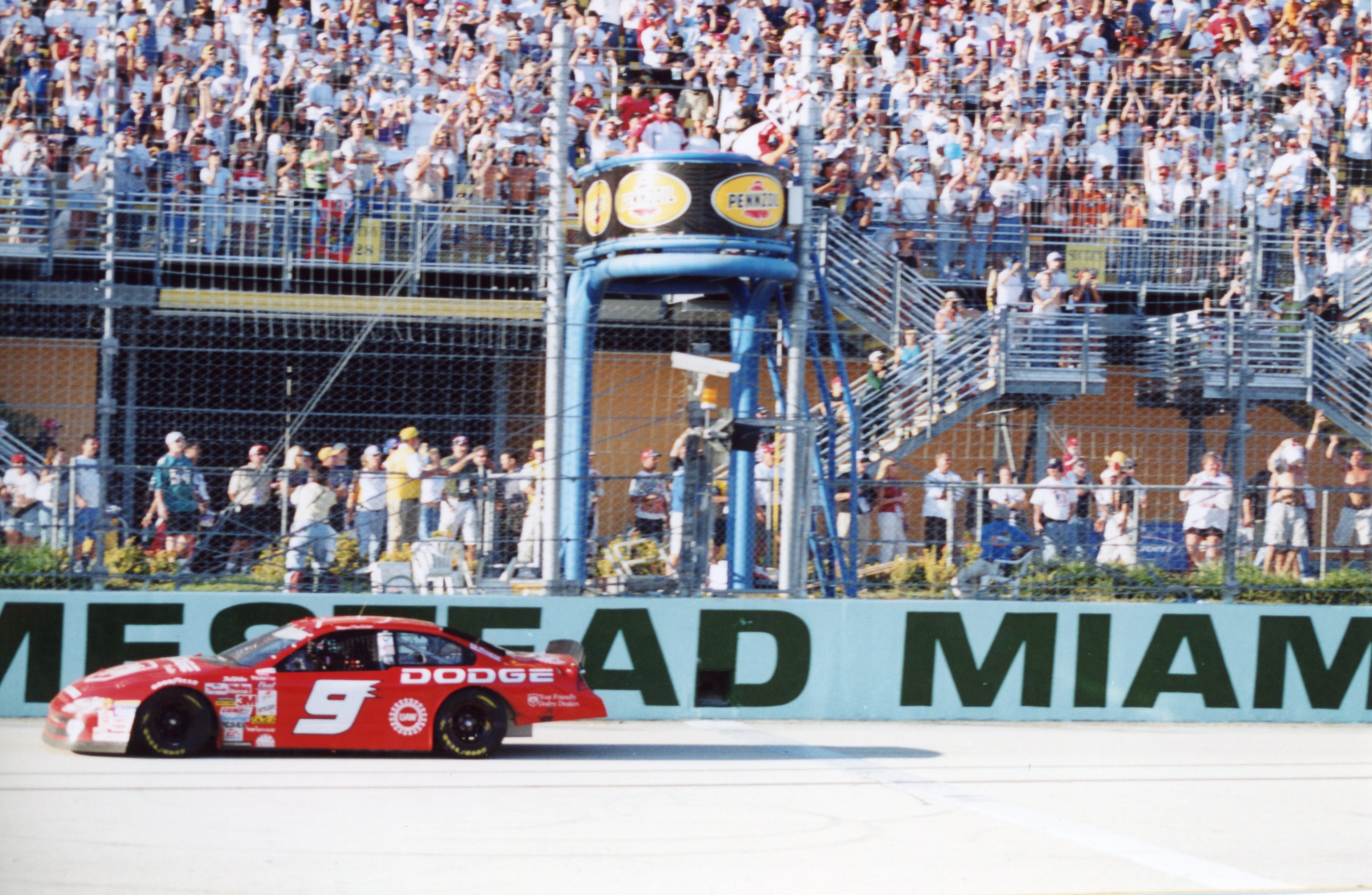 HOMESTEAD, Fla., Nov. 11— For the longest time, this looked to be the day that Jeff Gordon would capture his fourth Winston Cup Series championship. But the hopes of Gordon, Nascar’s hottest driver, were dashed on Lap 152 of the Pennzoil 400 when he ran into the bumper of a competitor leaving pit road.

Once Gordon banged his rainbow-hued Chevrolet into Jeff Green, he was forced to return to the Homestead Motor Speedway pits to repair his left front fender. End of chance.

”We fixed the fender, but the car was just never the same,” Gordon said. ”It just ruined our day.”

With Gordon failing to seize the moment — he faded to 28th — the spotlight fell on 46-year-old Bill Elliott, who won his 41st Winston Cup race but his first in 227 races.

Gordon can still clinch the championship over Ricky Rudd by simply showing up for the season’s final two races, next Sunday in Atlanta and a week later in Loudon, N.H. He can also clinch by finishing at least 32nd among the 43 competitors in Atlanta.

One wreck put a cloud over the race. Ward Burton had to swerve left when leaving pit road to avoid hitting Casey Atwood and plowed into several workers around Rudd’s car.

Bobby Burrell, a front-tire changer for Rudd, was the most seriously injured and was transported 40 miles to Jackson Memorial Hospital in Miami for treatment of head injuries. He was knocked unconscious when thrown into a pit wall but was later reported to be awake and in serious condition.

Three others — two more Rudd tire men and a Nascar official — were treated for minor injuries. Burrell’s injury rekindled talk of pit- road workers being required to wear helmets. None of the injured were wearing helmets.

The Dale Jarrett and Green teams loaned Rudd several workers to fill the void on his team.

Starting 11th, Gordon quickly worked his way into contention in the 267-lap race. By the 37th lap, he had moved up to fourth. By the 58th, he was third. A lap later, he rocketed into second.

That was as good as it got for Gordon. He usually did not fare well on the six cautions that required fast pit work and restarts.

”I’m just disappointed that we had such a good car and such a good run going and we lost that valuable track position,” Gordon said.

Once buried in the back of the pack, he saw a side of racing that he rarely experiences.

”The way the guys drive back there is a lot different,” he said. ”They’re just battling real hard for every spot and you just get bumped and banged around a lot.”

The 30-year-old Gordon, who is making a mediocre 2000 season look like an aberration, took a parting shot at Homestead’s mostly flat mile-and-a-half oval.

”It’s no fun for the drivers,” he said, ”and I doubt whether the fans think it’s a lot of fun.”

It was certainly fun for the Dodge team. Still considered an outsider in its return to Winston Cup racing, Dodge took half of the top 10 spots, including Elliott’s victory and Atwood’s third-place finish. Elliott and Atwood, 21, battled for the lead through much of the race’s late stages, before Atwood faded on tread-bare tires and was passed for second by Michael Waltrip, who was 1.42 seconds behind Elliott.

”I felt I had two kids out there playing a baseball game and I didn’t know which one to root for,” said Ray Evernham, a Dodge team owner who was once Gordon’s celebrated crew chief. ”I’m just glad they didn’t wreck.”